In Toronto and Vancouver, the rental housing shortage is more acute than previously thought
Research

In Toronto and Vancouver, the rental housing shortage is more acute than previously thought

Earlier this year, GWLRA published research into pent-up demand for purpose-built rental housing in Toronto and Vancouver. This was based on the number of households renting condos, who, based on our research, would prefer to be in purpose-built rental. This equated to:

This knowledge provides assurance to GWLRA’s investment and development divisions as well as our clients that rental housing fundamentals are strong with a minimal risk of future oversupply.

Recently, in both Toronto and Vancouver, we have seen unprecedented growth in both rental rates and ownership costs. On the one hand, these higher rents make more sites viable for developing new rental housing—of significant interest to GWLRA as our pension fund and institutional clients would welcome an opportunity to have us develop more rental housing for them. On the other hand, our development team as well as clients and other stakeholders have questions about the longevity of the recent pace of rent increases. To better understand the recent rental market, GWLRA Research undertook a comprehensive examination of the overall housing market in these two cities.

In addition to past research, new evidence from the 2016 census as well as immigration and migration population flow information points to an even greater level of pent-up demand for housing, including rental homes. Below we offer several different lenses that magnify reasons for the housing crisis. The numbers are not fully cumulative as some measures overlap.

In three years ending mid-year 2017, Toronto added a total of 87,000 young adults, age 25-39 to its population. This is prime rental age. Vancouver added 22,300 in this age group, making for an average growth each year of 29,000 and 7,400 per year, respectively. These numbers represent the aging of the population already there as well as in-migration from all sources save for non-permanent residents (a key component not always reported in population growth statistics).

This strong growth in the rental age population is not resulting in as many rental households as would be expected. The scarcity of rental housing at any price and the growing costs of ownership is resulting in fewer in this cohort forming their own households. See also Figures 1 & 2 below.

More Young Adults Living With Parents in Toronto and Vancouver

In the 2016 Census, Toronto had 279,000 adults age 25-39 living with their parents or 22% in that age cohort. Vancouver had 92,000 such grown up children living at home or 18%. Certainly, some adults choose to live with their parents for reasons other than acute housing shortages and high rents or prices. Some might stay with parents while going back to school or because it’s their family cultural norm until marriage, or to save, or to help with care giving or other needs in the family home. We therefore compared Toronto and Vancouver to Calgary, where, despite being in a recession in 2016, only 10% of children 25-39 were living with parents at the time of the census. See figure 3, below.

Based on the Calgary experience, we can assume approximately half of adults living at home in Toronto and Vancouver would prefer to be in their own place, if it they could find one at an acceptable rent or sale price. This suggests an additional pent-up demand for rental and ownership housing of between 23,000 and 46,000 homes in Vancouver, depending upon household size; we can assume some would move in with a roommate or partner. For Toronto, we likely have an additional pent-up demand for 70,000 to 140,000 units of either rental or ownership housing. Taking the low end of the demand range, and assuming half would be renters, results in 12,500 more units of pent-up demand for rental in Vancouver and 35,000 in Toronto.

Annual net newcomers to these cities have also increased. If we add net domestic migration, net international immigration, AND net total of Non-Permanent Residents (lets call them collectively “net newcomers”), it illustrates an acceleration in the growth in demand for rental housing.

Vancouver had an average of 33,800 net newcomers each year from 2015 to 2017 and Toronto added 66,125. Approximately 75% of newcomers rent in each city according to the census. If we put them into two person households (migrants tend to be younger and move as singles or couples), then newcomers add demand for 25,000 more housing units in Toronto and 12,000 in Vancouver—in addition to existing pent up demand from adult children living with parents. And all of this is aside from the condo renters who would prefer purpose-built rental homes.

Even if we add in the total gross ownership housing completions (we do not have good data on demolitions), these markets are not supplying enough housing. Toronto added a gross 35,000 homes on average 2015-2017, given 12,000 were single family and likely simply replacing an existing home, and accounting for other demolitions, the net number of homes is likely closer to 20,000-24,000. In Vancouver, the gross completions averaged 19,000 in the three years ending 2017, with 4600 being single family and therefore simple replacements. This combined with demolitions to make room for new condo and rental buildings would suggest a net new housing supply of approximately 12,000-14,000 units (again all types). That is likely not enough to meet the demand growth each year, and will not reduce pent-up demand for housing.

To meet the demand from newcomers alone, each year the Vancouver market needs to add or free-up approximately 12,000 rental units while Toronto needs to add or have vacated 25,000 rental homes. The past three years Toronto managed 14,000 new rental homes annually while Vancouver achieved 3,400. Existing renters moving into ownership would create room for newcomers. Except, the ownership market is also not matching demand growth in either city—and tighter mortgage rules has made purchasing more challenging, leaving households to rent for longer. Both cities also have a substantial number of adult children age 25-39 living with their parents, many of whom represent demand for rental housing. Even if somehow new supply doubled, and was matching or slightly exceeding demand growth, we then have this large cohort trapped at home—as well as adults in overcrowded living conditions with unrelated persons—who need homes as well.

For GWLRA’s rental development pipeline on behalf of clients, the evidence of an even more acute housing shortage provides strong comfort that new supply will not result in a higher vacancy rate. There will be ample renters eager to live in our new homes. Taking a larger view, however, leads to some concern about whether the recent pace of economic and job growth is sustainable given the lack of housing options. Rising rental and ownership costs may result in some employers being unable to attract and retain talent in both of these cities. This is an issue we have begun to monitor, as it impacts all real estate asset classes, especially office demand; this will be the subject of a future research note.

So Where Are People Living?

This severe housing supply shortage leads to the side question, where are people living? A housing analyst and mathematician, Jens von Bergmann, in Vancouver uncovered a significant growth in “unusual households” and over-crowded households in the 2016 Census. Unusual households are situations such as a couple, sharing a home with an unrelated person. The 2016 census-based estimate is 138,000 such households in Toronto and 54,000 in Vancouver. Overcrowded homes are those where there are insufficient bedrooms for the quantity and types of people living there (for example a couple and two children in a 1 bedroom unit). The census-based estimate is 7.3% for Vancouver and 9.6% for Toronto. Without knowing more about these households, it’s difficult to measure pent up demand for additional housing (the family crammed into a 1 bedroom may represent pent-up demand for a larger home, but not an additional home, for example, whereas four unrelated adults in a one bedroom unit would represent pent-up demand for housing). Therefore, although the exact amount is difficult to calculate, we can conclude it exists. 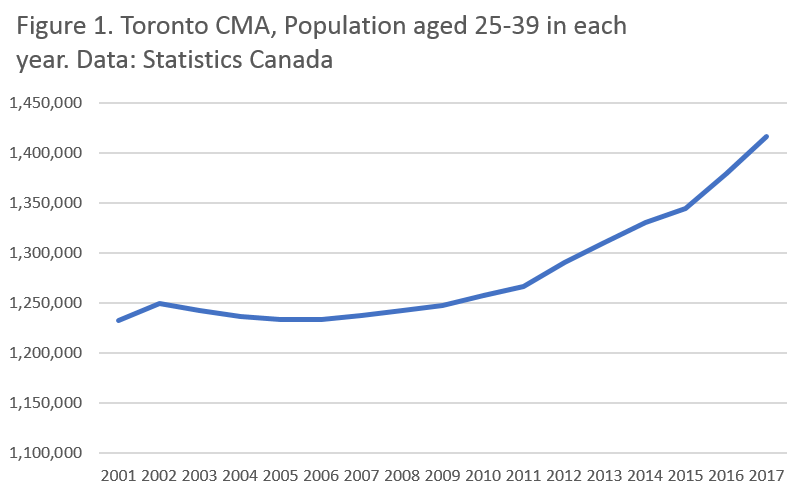 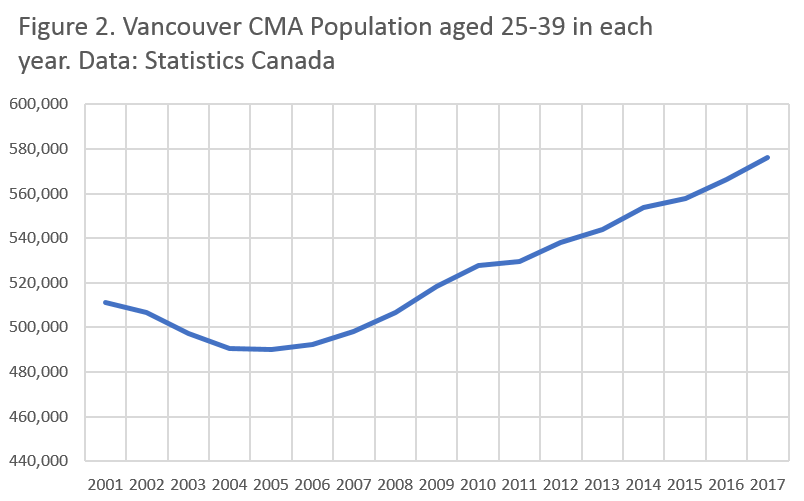 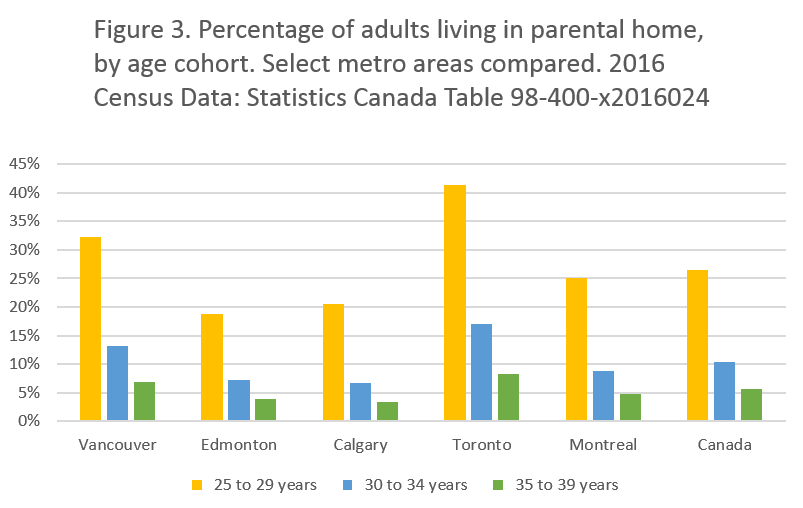